Since my move back to the Boston area I’ve been so busy with work (up to three jobs at a time) that I’ve hardly had time for other things, including this blog. But I want to turn things around in the new year and kick start this blog.

Reilly and Ryan have settled in comfortably. Each has their own preferred spots – Reilly likes the height of the divider and the bookcase, as well as the heat of the spot near the heater behind the couch, while Ryan loves to cuddle in my bed or to nab a spot on one of the kitchen chairs (we keep them pushed in so he doesn’t end up on the table), but when the chance presents itself, he’s off exploring any closet that is open.

They are under the impression that they rule the house, and they probably do. Unlike many cats who get dry food left out all day or meals in the morning and at night, they get small meals several times a day. It seemed like a good way to parcel out the food in a house where there’s almost always someone home and wandering in and out of the kitchen. We tried to keep up the twice a day feedings of larger portions, but they turned their poor, pathetic, starving looks on us and ended up with far too many treats. So now they get a bit of food about every six hours. It hasn’t made them stop trying to turn on the charm, but it’s made it easier for us to say no.

Here are some shots from the past year: 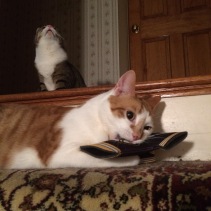 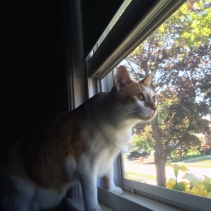 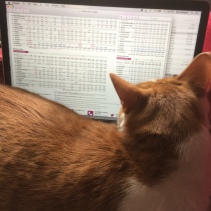 Back in NYC, you likely would have seen more pictures of Reilly than Ryan. But since Ryan spends more time in my bedroom, he gets the bulk of the shots lately.

Hope you like them. I’ll try to get back to updating this on a regular basis.